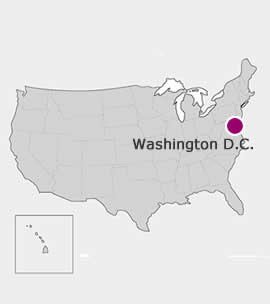 The English school in Washington is a true institution in the city. Founded in 1986, it has nearly 30 years experience in teaching English as a second language to students and professionals from around the world. The school is an official centre for IELTS Cambridge and TOEFL exams.

The academic centre has an excellent location in the city, a few minutes from the centre and a few steps from the historical Georgetown, full of bars, cafes, shops and commercial streets.

All of the teachers are native, qualified, and have many years of experience in teaching English. The classes are dynamic and effective in helping students achieve their objectives of learning in a short space of time.

Our school is located in a modern building in the city center near the George Washington University and Dupont Circle. The school offers first class facilities. It is a large and prestigious school that welcomes students every year worldwide. It has comfortable classrooms, excellent location and first class facilities, and includes an extensive library of self-study materials, computer room and a student lounge. In addition, every week the school organises many activities and excursions in and out of the city.

Washington DC is the capital of the United States and comprises the so-called District of Columbia (abbreviated as "DC"), a different entity of 50 states that make up this nation. Washington DC is more than a city but less than a state. It is a "district" created by the Congress of the United States in 1790 as a meeting place and for transactions for government affairs.

Today Washington is the center of cultural life and U.S. politics. All American history is etched in the streets of this teeming city of monuments and memorials; but Washington is a city that looks to the future: it is a world capital with modern shopping centers, restaurants and countless things to do. This beautiful city has elegant buildings, wide open spaces, parks full of trees and many natural areas within the city.

Things to see and do in Washington

Moving around the city - Public Transport

The street system of the city is easy to understand but difficult to manage. The streets from north - south are numbered, and the east-west direction have letters, starting with the Capitol and extending in both directions. There may be two streets called the 3rd. (A Capitol east and west), and there may be two streets called "D" (one north of the Capitol and one south). Thus, the city is divided into quadrants. To find an address, you should specify the quadrant. There are a number of broad avenues leaving the Capitol in the form of spokes of a wheel. They create some complicated angular intersections that can confuse even the most experienced driver.

To move within the city of Washington DC, the Metro will be your ideal mode of transportation as it reaches everywhere in the city. However, there is also a network of buses running between neighbouring towns and subway entrances. In any case, the public transport operates from 5:30 am to midnight, and rates vary depending on the destination and time of day.

What to do in Washington

Washington has a lot to offer! Check out the local tourism website for more information: washington.org

The classes can be in the mornings or afternoons. You can indicate your preferences when reserving your place:

No VISA is required

Ideal for those that want to have enough time for their studies and to enjoy their free time visiting the city and sightseeing.

During the classes, the students will improve their vocabulary and their fluency in English, as well as developing all the basic competencies of the language with a focus on speaking and understanding.

The classes can be in the morning or afternoons. You can indicate your preferences when reserving your place:

No VISA is required

Ideal for those that want to have enough time for their studies and enjoy their free time visiting the city and sightseeing.

During the classes, the students will improve their vocabulary and their fluency in their use of English, as well as developing all the basic competencies of the language with a focus on their capability of speaking and understanding.

For this course the student visa is necessary.

There are classes in the mornings and afternoons; you can indicate your preferences in the reservation form.

Ideal for those that want to get the most out of their stay studying in the academy in the mornings and afternoons.

The intensive English course maximises your time studying. The objective is to satisfy your learning needs, improving your communication skills and putting effective strategies in practice for reading, writing and speaking.

You can also choose between:

The school organises a varied and interesting programme of social activities. Participating in our activities is a perfect way to explore the city and its surroundings and to make new friends.

We offer accommodation in a student residence located in the city center next to the George Washington University. Living with other students is a great way to practice your English in a relaxed atmosphere full of young people worldwide. We offer double and single bedrooms. Each apartment has a kitchen, TV, common room, a gym and laundry access. The building also has a grocery shop and security 24 hours a day.

How to get to Washington

The Washington Dulles International Airport, is one of the most modern and important airports in the country. It is located 42km west of the city in the State of Virginia.

Companies that fly to Washington from Spain are:

Transport to the city

There is a shuttle service that connects the airport to the center and the central train station (Union Station). This is a service that will leave passengers one by one at their destination.

In the terminal you will find information about public transport in Washington.